an invitation to make connections

John Whitney used the term visual music to describe the abstract films he made in the 1940s. This is the only term I have found that describes what I make, but, as Whitney himself said, it evokes preconceptions that I wish to avoid.7

From Minor White to Jon Rhodes, photographers have made sequences of images. White claimed that a sequence of photographs makes monumental single photographs seem like tombstones.6 A Duane Michal’s image, for example, taken out of its sequence, would probably seem more trite than spiritual; a collection would do little more. But a sequence evokes a sustained and coherent thoughtfulness. The key, I believe, is that a sequence can suggest the passage of time.

The notion of time does not have to be developed in a literal or heavy-handed way; White’s tombstone can be removed quite gently, as his own sequences demonstrate. Nevertheless, a spatial sequence remains disposed in space, subject to the culturally conditioned urge to read from left to right and top to bottom, or the viewer’s choice of itinerary. In my pieces, constructed on one screen from two projectors with the accompaniment of audio tape, the dimension of time enters the frame of the art.

Temporal art is essentially ungraspable—it lives on the exquisite razor’s edge that divides past from future, the timeless time called now—and the ungraspable is an invitation to imagine.

A long slow dissolve from one image to another can heighten awareness of our grasping at the has been and the might become. A smaller change can make for greater seeing.

The fast cuts and slow dissolves of a slide-tape piece form an accessible language, familiar in television and cinema, but different because a slide-tape piece usually leaves more space for a viewer’s imagination. It treats an audience with more respect and it expects more from an audience. As Marco Livingstone writes of Michals’ spatial work, sequences stand in a similar relation to movies as poems do to novels: they act on the imagination not through the accumulated evidence of description and explanation, but through the compression of single images rich in metaphorical allusion.3 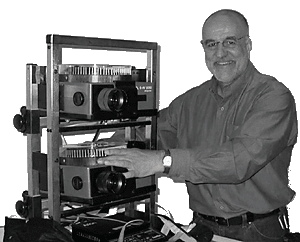 Each slide-tape piece must leave these spaces for imagination and make these invitations. Beyond that, I strive to build each piece with a structure that withstands repeated viewing. I do not wish to spell everything out. We expect to revisit a poem or a piece of music.

You just can’t pick up any thread of tradition winding back into the past…[visual music] is a new art which demands complex tools, wrote Whitney in 1973. Later he claimed, It has passed generally unnoticed that this preoccupation of the last one hundred years has been towards a musicalization of visual art. I was unaware of Whitney’s comments when I first began work on a slide-tape piece in 1980, yet it soon became clear that I was drawing more from music and the performing arts than from the visual arts. I still feel more in tune with composers of electronic music, minimalist music and musique concrète than I do with most photographers. The musique concrète of Adrian Keenan, in particular, inspired me to consider concrete, literal images as the raw material for manipulation and temporal composition. The musical sensibility is precisely that of the pure mathematician who strives to create abstract structures, one whose interest lies not in things but in the relationships between things.

Most of the photographs that I use display a basic technical competence, but not all of them. Photographers often ask me why I show photographs that are overexposed or badly composed. The answer, of course, is that I am not showing photographs, I am showing transitions between photographs. It is the relationship between the images that interests me. As individual photographs they may or may not be well composed. I remain fascinated by the subtlety and complexity of spatial relationships when they are juxtaposed in time. A slide-tape piece invites a viewer to make new connections.

Adding sound to a temporal sequence is as obvious a step as adding text to a single photograph. The combination can transform our perception of the components (for good or ill). What White wrote about photography and text is easily transferred to photography and music:

White’s arithmetic applies to audio-visual works. The synergy between music and photography in a slide-tape piece can have a remarkable force, whether the media are competing or cooperating. Slide-tape is a heterosensuous medium.

I am grateful to Tony Chadwick for his invaluable comments on an earlier draft of this statement.1