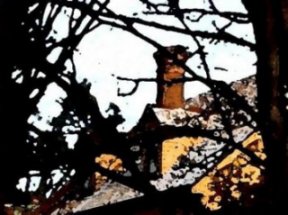 Glenn Woodley has been resident in Heaps Cottage, Hill End, since 1995. He trained at the National Art School in the 1970s and has held a number of solo exhibitions in commercial Sydney and regional galleries. His work has been included in the tour of Blake Prize for religious art on several occasions. In the same way that his highly stylised paintings reduce buildings and landscapes to posterized fields of pop-like colour, his reworked digital photographs of Hill End reflect a unique and idiosyncratic vision that subverts the conventional romantic aesthetics so powerfully associated with the town.